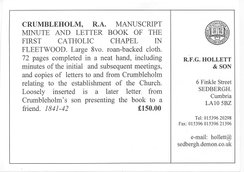 The birthpangs of the first

'The Revd ____ much fears that on signing the note the persons who have done so have signed their own death warrant.'

A tale of rebellion and betrayal!   An absolutely riveting read!

'.... I put it to you as a Vicar, a Christian aye as a Catholic Clergyman and candidly ask is your conduct manly, is it Christian, or is it Clergymanlike ......'

Extracts   (click on any page below for a larger picture)

AD2000 - The Story of Christianity in Lancashire

An exhibition at the Museum of Lancashire in Preston during the whole of the year 2000, including our 1841 Minute Book.