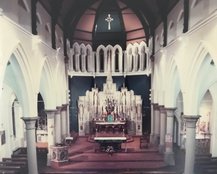 which still stands today in Queen's Terrace opposite the former P & O berth is recorded as being the venue for a general meeting of Fleetwood and area Catholic visionaries held on 9 February 1841 in order make arrangements for the celebration of Divine Service. The minutes of the meeting show that “It was unanimously agreed by the Meeting that a room belonging to Mr J Newsham be taken at the annual rent of £15 from the time Mr J Newsham gives up possession of the same and that after possession and previous to occupation the aforesaid room be made as commodious and as suitable as possible for the purpose.”

At that time there were 439 Catholics in the small town of Fleetwood. By March 1841, the plans had changed to “erecting a Temporary Wooden Shed” but in April they changed again - “Our present scheme is to take land for 4 cottages; raise and finish the outer walls, floor and roof; the interior to be used as a temporary Chapel till the permanent one be built, and afterwards to be made into cottages; the present estimate of the expense may probably be about £450, to be raised in shares of £5 each. The cellars under the chapel will be converted into dwellings, and the rents appropriated towards the interest of the money subscribed by the shareholders.”

This final scheme was formalised on May 3rd 1841 in a meeting at which the following resolution was carried "That five trustees be appointed to raise funds to engage land and to contract for the building of a temporary Catholic Place of Worship at Fleetwood with as little delay as possible."

From this meeting Trustees were appointed, the necessary funds raised and then at a cost of £629, four dwelling houses purchased in Walmsley Street which were converted to establish the first Catholic Chapel Mission in Fleetwood which was then opened for divine service in the Autumn of 1841.

In 1847 Rev. E. Gibson was appointed, who using accounting and business skills acquired before being called to the priesthood negotiated the purchase of land in London Street primarily for a school and Church. The construction of an infant school was duly completed in 1851 but in 1865 exchange of the remaining London Street site was negotiated for the present Church and Presbytery site on Lord Street.

In 1864 Rev. T. Bridges took charge of St. Mary's Mission for 33 years. He must have been a remarkable and energetic man of his time who in addition to his priestly duties through those years was to establish the school in new and spacious buildings on their site in London Street as well as laying the foundation of the present Church and Presbytery.

In May 1866 the foundation stone of St. Mary's Church was formally laid by Bishop Goss and today’s Church constructed at a cost of £4,000, originally to accommodate 600 persons. The church was solemnly opened by Bishop Goss in November 1867. The present Presbytery in Kemp Street was completed in 1878, although the bay windows were to be added at a later date.

The final debt on Church and House was paid off in 1891, and in 1896 land for a new school was obtained in London Street and the school constructed. This school was found to be severely affected by dry rot and declared to be beyond economical repair in 1992 and a replacement school was built on the same site, being opened in January 1995.

The Church was consecrated on April 21st 1937 in a service which was celebrated by Canon Clarke, the Rt Rev Mgr Knuckey,VG, the Right Rev B.P. McCormack (Hexham and Newcastle) B.P Pearson, B.P. Dobson (Arcadia), Fr Bryce and Canon Bamber to name a few.

The present Catholics of Fleetwood are truly indebted to Sir Peter Hesketh-Fleetwood who waived the Chapel £3.14s ground rent for at least the first 3 years of its existence thus assisting toward establishing the Chapel as a permanent place of worship in a town with a population of 15000 approx of which only 1500 including 300 children of school age were Catholic and which was only just becoming well known as a fashionable watering place. It was from this modest beginning then that the Catholic Church along with other denominations was to expand to eventually support 3 Parishes in Fleetwood each with a primary school and for a secondary school to be established in 1963.

This is only a brief background to historical events and can in no way convey the amount of hard work by countless nameless Fleetwood folk to ensure adequate funds were available then and which still continues today. Church roofs seem to have a habit of being in constant need of repair and attention, records show that the original Chapel was severely damaged in a great storm of 1852 and indeed storm damage left the present Church roof requiring urgent repairs in the twentieth century and even more extensive refurbishment to the roof and supporting beams was necessary in 1991.